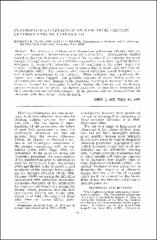 Prior, Richard B.
Kreier, Julius P.

Erythrocytes of chickens with Plasmodium gallinaceum infection were exposed to ultrasound at frequencies between ',YA4 and N57 kHz. All frequencies studied caused erythrocytc disruption and release of free parasites if the intensity was great enough, although irradiation with IYM kHz appeared to cause more rapid crythrocytc disruption at comparable intensities than did irradiation at the other frequencies studied. Cellular disruption was slower in plasma than in saline, Alsevcr's solution, or phosphate buffer. Any intensity which caused cavitation caused disruption at a rate roughly proportional to the intensity. When cavitation was suppressed, disruption was almost stopped. The probable sequence of events during sonication of erythrocytes was local damage to the membrane resulting in distortion of the erythroeyte followed by subsequent hemolysis leaving the parasite and erythrocyte nucleus enclosed in the ghost. On further sonication the membrane disrupted and both parasite and nucleus were released. If the parasites were not removed from the ultrasonic field, they, in turn, were disrupted.