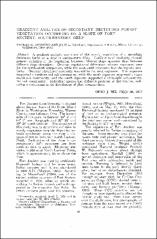 A gradient analysis was made of the woody vegetation of a secondary deciduous forest on a slope in southwestern Ohio. Coefficients of similarity showed greater variation in the vegetation between different slope eposures than between different slope elevations. Greatest vegetational differences between exposures were for the north-south comparison, while the west-south exposures had the highest similarity. Greatest elevational similarity was within the west exposure. This exposure supported a northern red oak community, while the north exposure supported a sugar maple-oak community, and the south exposure supported a chinkapin oak-northern red oak community. Individual species had different patterns of distribution, indicating a continuum in the distribution of plant communities.