Photoperiodic Effects on the Postjuvenal Molt of the Eastern Bluebird 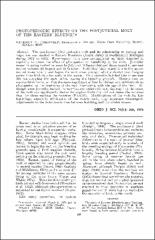 The postjuvenal (first prebasic) molt and its relationship to nesting and migration was studied in Eastern Bluebirds (Sialia sialis) in southeastern Michigan during 1972 to 1975. Experimental data were accumulated on birds observed in captivity to assess the effect of photoperiod on variability in the molt. Juveniles reared in spring molted between 18 July and 10 September and those reared in summer molted between 26 August and 16 October. Individual birds reared late in the season molted more rapidly and began the molt when younger after a shorter post-fledging period than birds hatched early in the season. Only juveniles hatched late in summer did not complete the molt before leaving the breeding grounds. Observations on captive birds indicated that the more rapid molt of late hatchlings was attributable to photoperiod at the beginning of the molt interacting with the age of the bird. Although some juveniles molted the rectrices and others did not, daylength at the onset of the molt was significantly shorter for captive birds that did not renew the rectrices than for those molting the rectrices (P<0.01). Modifications of the molt by late hatchlings, especially elimination of the rectrix molt, may represent bioenergetic adjustments to the reduction in time between hatching and the winter season.