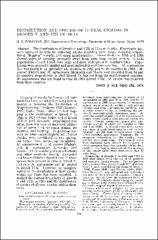 The distributions of Broods V and VIII of 17-year cicadas, Magicicada spp., were surveyed in Ohio by collecting adults, recording male songs, mapping ovipositional flagging records, and using questionnaires. Brood limits in 1965 and 1968 showed signs of receding, primarily away from some large urban centers. Cicada populations of each brood were large and more widespread in southern Ohio. Populations were generally smaller and more isolated in northern counties. M. septendecim (L.) was found in 41 (probably 43) counties in 1965 and in six counties in 1968. M. cassini (Fisher) and M. septendecula Alexander and Moore were recorded from 34 and 23 counties, respectively, in 1965 (Brood V), but not from the northernmost counties. M. septendecula was not found in Ohio in 1968 (Brood VIII); M. cassini was collected from three counties.