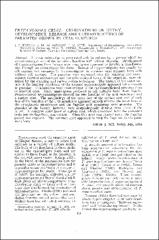 T. cruzi epimastigotes penetrated cells in culture by a process which involved entanglement of the parasite's flagellum with cellular filopodia. Development of trypomastigotes from intracellular amastigotes appeared to involve a transformation through an epimastigote-like form. Release of trypomastigotes was usually by cell rupture but occasionally trypomastigotes in vacuoles were released from cells without cell rupture. The parasites were examined with the scanning and transmission electron microscopes and three-dimensional views of the organisms were obtained by the scanning and carbon replica techniques. The texture of the outer surface of the limiting membrane of the scanned trypomastigote appeared fairly smooth to granular. Granulations were more evident in the carbon-replicated parasites than in scanned ones. Many amastigotes produced in cell cultures have short flagella. Freeze-cleaved trypomastigotes showed the two lamellae of the unit membrane and a surface coat. The morphology of the outer face of the surface coat and of each face of the lamellae of the unit membrane appeared smooth whereas the inner faces of the cytoplasmic membranes and the flagellar unit membrane were granular. The granules of the former, however, were morphologically distinct from those of the latter. A common outer layer or surface coat, which enveloped both the parasite's body and its flagellum, was evident. When this layer was cleaved away, the flagellar pocket was exposed. The common layer appeared to bind the flagellum to the parasite's body.