Fungi in and Near Streams Carrying Acid Mine-Drainage 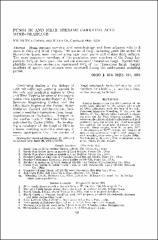 From streams carrying acid mine-drainage and from adjacent soils in 3 areas in Ohio and West Virginia, 189 species of fungi, including yeast like as well as filamentous types, were isolated using agar pour plates and shaken flask cultures. The more important members of this population were members of the Fungi Imperfecti, 25% of these yeast like and the remainder filamentous fungi. Species with phialidic conidium production represented 80% of the filamentous fungi. Larger numbers of species and colonies were recovered during the mid-autumn sampling period.