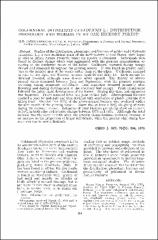 Studies of the distribution, phenology, and biomass of goldenseal (Hydrastis canadensis L.), a rare medicinal plant of the northeastern United States, were begun in 1973 in Bryan Nature Preserve, where the species is abundant. Individuals were found in distinct clumps which were aggregated with the greatest concentration occurring in the northwest corner of the forest. Goldenseal matured during canopy closure and remained throughout the growing season. It was found in greater numbers in the interior area of the woods rather than on the edges. Goldenseal emerged in mid- to late April and flowered between April 20 and May 10. Each mature individual flowered, although some flowers never opened. The density of aboveground stems decreased between June and September, with th.2 greatest attrition occurring among immature individuals. Leaf expansion occurred primarily after flowering and during development of the overstory leaf canopy. Fruit enlargement followed the initial rapid development of the leaves. During this time, leaf expansion was depressed. Fruits matured from late June to late July. Above-ground biomass reached a peak by mid-July and then declined with senescence of plants until the first killing frost. Greater than 95% of the above-ground biomass was produced within the first month of the growing season. There was at least a 20% sloughing of roots during the dormant season. Estimates of total biomass per clump show an increase of 24% in both edge and interior clumps between 1973 and 1974. Although the total increase was the same in both areas, the interior clump biomass increased because of an increase in the proportion of larger individuals, while the greater edge clump biomass was due to new individuals.