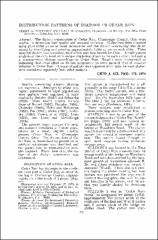 The diatom communities of Cedar Run, Champaign County, Ohio were studied to determine their spatial and seasonal variation. Collections were obtained using glass slides as an artificial substratum and the diatom community was determined by identifying and counting approximately 1,000 valves on each slide. There were 190 diatom taxa identified, 82 of which were new records for Ohio. A multivariate analysis of the data resulted in unique clustering of points for each station, indicating a heterogeneous diatom assemblage in Cedar Run. Results were interpreted as indicating that areal effect on diatom community patterns masked that of seasonal influence in Cedar Run. A seasonal pattern was apparent when data for each station were considered separately from other stations.