Effectiveness of Antimycin A, Oligomycin, and Sodium Cyanide as Inhibitors of Rat Bone Marrow Oxygen Utilization 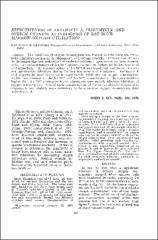