Misfit Streams and the Possible Glacial Origin of Their Valleys 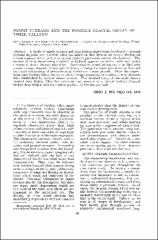 A study of misfit streams and meandering depressions developed in ground moraine deposits near Dayton, Ohio has indicated that streams are re-establishing old stream courses, which persist as buried channels previously carved into bedrock. The erosion of deep meandering channels in bedrock appears consistent with melt-water streams let down through glacial ice. Such channels would subsequently be filled with porous stream deposits in post-glacial times, allowing for rapid groundwater flow and enhanced solutioning of predominantly carbonate stream gravels. Once the depressions were lowered below the water table through groundwater solution, misfit channels were established by normal stream erosion. The detailed study of one misfit stream located near Byron, Ohio has indicated the presence of a buried bedrock channel 90 feet deep with a bedrock surface gradient of 400 feet per mile.