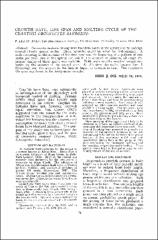 Orconectes sanborni young were found to hatch in the spring and to undergo several closely spaced molts. These juveniles could be sexed by mid-summer. A molt occurring in the autumn of the first year was the beginning of a pattern of two molts per year, one in the spring and one in the summer or autumn, although the precise timing of these molts was variable. Both sexes usually reached sexual maturity by the autumn of the second year. At this time the males became form I (breeding) and the oocytes in the females began to increase in size. The maximum life span was found to be thirty-seven months.

Author Institution: The Department of Zoology, The Ohio State University