Sulfur Isotope Composition of Some Sulfide and Sulfate Minerals in Ohio 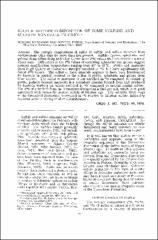 The isotopic compositions of sulfur in sulfide and sulfate minerals from northwestern Ohio vary by more than five percent. Sulfides (pyrite, sphalerite, and galena) from Gibsonburg and Clay Center have <534S values that are closely clustered about zero. Differences in the <534S values of coexisting sphalerite and galena suggest isotopic equilibration temperatures ranging from 43° to 63 °C. Pyrite and marcasite from Pugh Quarry at Custar are strongly enriched in 32S, but have significantly different <534S values. The sulfur of these minerals appears to have been fractionated by bacteria in marked contrast to the sulfur of pyrite, sphalerite and galena from Clay Center. The sulfur of marcasite is less enriched in 32S compared to coexisting pyrite, perhaps because marcasite is a secondary mineral formed from H2S produced by bacteria working on sulfate enriched in 34S compared to normal marine sulfate. The <534S of anhydrite from the Tymochtee Formation is 24.9 per mil, which is in good agreement with values for marine sulfate of Silurian age. The celestite from vugs in the Greenfield Formation is enriched in 34S relative to Silurian sulfate, indicating bacterial activity during or after dolomitization.