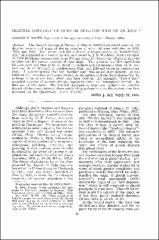 The Second Geological Survey of Ohio in 1869-73 produced more or less detailed reports and maps of the 88 counties of which 83 were published in 1873, 1874 and 1878. Each report included a shorter or longer section on Surface Geology, all organized in a similar fashion, as directed by J. S. Newbcrry, State Geologist. In 1874 Newbcrry summarized, in an 80-page essay, the knowledge of glacial deposits in Ohio and the current theories of their origin. The synthesis was developed from his own work and that of M. C. Read in northern and northeastern Ohio, G. K. Gilbert and N. H. Winchell in northwestern Ohio, and Edward Orton in southwestern Ohio. It was recognized that the bowlder clay was an ice sheet deposit. It was believed that erracties were concentrated on the surface and had been transported by icebergs in an inland lake, which was later drained. An extensive Forest Bed recorded a period of warmer climate, named by Orton an Interglacial Period, the first use of this term. The detailed descriptions, maps and sections are valuable records of the observations of these outstanding geologists as are the explanations they proposed for the Ouaternary history of Ohio.