The Energetics of Endotherms 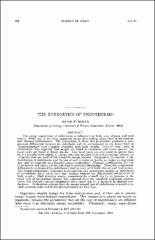 The energy expenditure of endotherms is influenced by body size, climate, and food habits. Body size is the most important factor determining basal rates of metabolism and thermal conductances. The interaction of these two parameters produces a temperature differential between an endotherm and its environment at the lower limit of thermoneutrality that normally increases with body weight. Greater basal rates of metabolism than expected from weight are found in temperate and arctic species; low basal rates are found in desert species. Low basal rates are also found in species that have a periodic food supply, in species that harvest food in an indescriminate manner, or in species that use food of low available energy content. Geographic limitations in the distribution of endotherms and the use of such evasionary tactics as torpor or migration may also be responses to a limited energy availability. Thermal conductances are low in temperate and arctic species, but high in tropical endotherms. Thus, the temperature differentials maintained by endotherms tend to vary with both climate and food habits. The weight-independent variations in metabolism and conductance permit an endotherm to compensate for a small body size, making temperature differentials independent of body weight. High intensity species compensate for a small size by an increase in the basal rate of metabolism beyond that expected from the standard weight-metabolism curve; low intensity species compensate for a small size by a decrease in thermal conductance. It therefore appears that the energy expenditure of endotherms is sensitive to their economic roles and to the physical conditions they face.