The Annual Distribution of Phytoplankton Communities in a Southeastern Ohio Pond 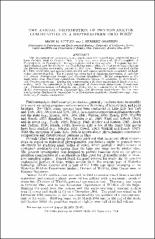 The phytoplankton communities of a southeastern Ohio pond were monitored weekly from October 1964 to October 1965. Ninety taxa were identified: 56 Chlorophyta, 6 Chrysophyta, 14 Cyanophyta, 10 Euglenophyta, and 4 Pyrrhophyta. The pond was partially drained and the fish were removed during winter 1964; this had no marked effect on the phytoplankton community present at that time. Prominant pulses occurred during fall 1964, April 1965, and summer 1965; the fall and summer peaks were associated with pH values greater than 9.0. The fall pulse was comprised of Anabaena planctonica, A . spiroides var. crassa, Botryococcus braunii, and Ceratium hirundinella. Major components of the April pulse were Dinobryon cylindricum, Oscillatoria limosa, 0. amphibia, C. hirundinella, and Uroglena americana. During the summer pulse a distinct succession of dominants was evident, with the community in July composed of Staurastrum uniseriatum, Scenedesmus spp., Pediastrum duplex, and Euglena spp., giving way to a community in August that included Staurastrum tetracerum, Closterium spp., and Euastrum denticulatum; the last community being displaced in September by a Glenodinium quadridens, Scenedesmus spp., Anabaena sp., P. duplex community.