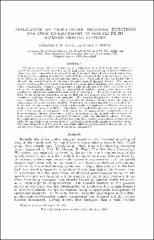 Whenever images are reproduced by the utilization of a time-sequential signal obtained by electron beam scanning or by flying-spot light-scanning of photo-conductive thin-films, etc., onto which an optical image is focused, lack of edge resolution occurs. This is due to a number of intrinsic, uncontrollable factors of the semiconductor, e.g., its finite thickness, finite size of the scanning beam, etc. Such lack of edge resolution makes difficult the determination of the exact configurations of imaged objects. The present paper describes a linear network composed of an operational amplifier arrangement which allows controllable steepening (crispening) of edge resolution even when the peaks of the edges are overemphasized. This is accomplished without causing the post-transient oscillations which conventional devices tend to introduce. The mathematical relationships of the electronic crispening set-up are derived, and transfer functions in the Laplacefrequency-, and time domains are analyzed. The Nyquist diagram of a typical arrangement shows that the system is stable even when it produces, from a unit step input, an output signal with an overshoot of 250%. Further the resulting signal is free of oscillations, in contrast to the second order system which exhibits permanent oscillations when producing an overshoot of only 100%. The phase and amplitude behavior for the second and third order system are compared. It is shown that the phase of the second order system is an increasing function of frequency with a steep slope at the critical value whereas the third order system exhibits a gradually increasing and then decreasing phase. Further, the amplitude response of the second order system rises sharply as resonance is approached, wrhile for the third order system there is a gradual peaking of the amplitude characteristic. The smoothing effect of the system on a signal exhibiting white noise is demonstrated; the out-put signal being virtually free of any noise components.