The Pre-Illinoian Lake Clays of the Cincinnati Region 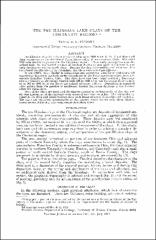 Pre-Illinoian clays have been known in Ohio since 1903 when W. G. Tight described their occurrence in the abandoned Teays River valley in south-central Ohio. Not until 1919 were similar clays noted in the Cincinnati region. These early occurrences were described from the unglaciated portions of northern Kentucky just south of Cincinnati, and their significance was not made clear. Because the clays occurred beyond what was then considered the Illinoian glacial boundary, the clays were called pre-Illinoian.