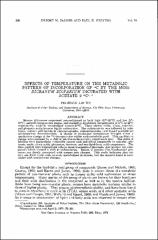 Mosses (Dicranum scoparium) preconditioned at both high (12°-22°C) and low (0°- 10°C) ambient temperature ranges, and studied at incubation temperatures of 5°C or 22°C respectively, actively metabolized acetate-2-14C. These plants malic, citric, aspartic, and glutamic acids became highly radioactive. The radioactivity was followed by solubility, column- and thin-layer chromatography, radioautography, and liquid scintillation spectrometric determinations. A change in incubation temperature brought about a qualitative change of the 14C-incorporation within each metabolic pool. This qualitative change was expressed by a shift in relative radio-activity within each pool. The shifts of labeling were particularly noticeable among such individual compounds as aspartic, glutamic, malic, citric acids, glutamine, dextrose, and two lipid-fatty acid components. The data suggest that temperature affects those biochemical processes that involve the compounds which showed a shift in radioactivity. Hence, it implies that biochemical processes are closely associated with temperature changes. This study indicates that not only are Kreb cycle acids actively metabolized in mosses, but the amount found is associated with temperature changes.