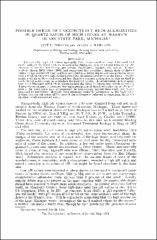 Unexpectedly high pH values (generally 7.9), encountered on loose dune sand and sandy soils on the Warren Dunes of southwest Michigan, were identified initially by the presence of certain lime-loving tree species (hackberry, hoptree, red cedar). Earlier workers (Kurz, 1923; Olson, 1958) had recognized this condition, though their published values do not exceed pH 7.G5, and had explained it as being due to carbonate grains, originating in till of wave-cut cliffs, being blown with the quartz sand up onto the dunes. Microscopic analysis of dune sand revealed less than two percent carbonates, so this method is not believed to be adequate to produce the high pH values. A better theory is that spray from Lake Michigan (pH 8.2-8.4), blown up onto the dunes by strong west winds, especially during winter storms, evaporates, leaving a precipitate of dissolved carbonate on the sand grains; the precipitate may subsequently be redissolved, moved downward, and reprecipitated by rainwater. Actually both processes probably contribute to the high alkalinities, but, for pH values of 7.9, most of the carbonate is believed to come from the lake's alkaline, wind-transported spray.