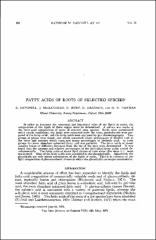 In order to interpret the structural and functional roles of the lipids in roots, the composition of the lipids of these organs must be determined. A survey was made of the fatty-acid composition of roots of selected crop species. Seeds were germinated under sterile conditions; the lipids were extracted from the roots, methyl ester were prepared of the fatty acids, and the fatty acids were analyzed by gas chromatography. Two groups of plants were found—one which contained larger percentages of linoleic acid in the roots and another which contained larger percentages of linolenic acid. In both groups the most abundant saturated fatty acid was palmitic. The fatty acids of tissue samples taken at different distances from the tip of the root were determined. It was found that the amount and relative percentages of the individual fatty acids varied developmentally. The fatty acids of major lipid classes of corn roots (Zea mays L.) were determined. Most of the fatty acids were esterified in the phospholipids. Apparently the glycolipids are only minor constituents of the lipids of roots. This is in contrast to the lipid composition of photosynthetic tissues in which the glycolipids are major constituents.