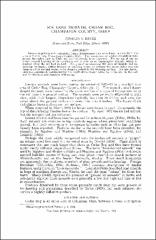 Dome-shaped mounds containing lenses of transparent ice were found in a one-half acre area in Cedar Bog, Champaign County, Ohio. The occurrence of ice-lens mounds in temperate latitudes such as Ohio has not previously been reported. Formation of the ice lenses caused heaving of the overlying soil to form small topographic mounds, which remained after the ice had melted. The ground surrounding the area of mounds did not develop ice lenses, either because of standing water or because the water table was too deep to allow ground water to be drawn upward to the freezing surface. Ice-lens formation was apparently controlled by the depth of the water table, by variations in the soil, and by the rate and duration of freezing.