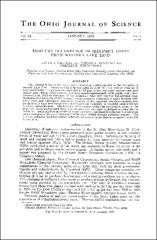 The Detroit River is the major source of mercury contamination in the sediments of western Lake Erie. Analyses of 63 sediment cores indicate that the mercury consists of two components: a high-concentration (0.5 to 4.0 ppm of dry sediment) mercury-enriched surface zone, whose concentration decreases pseudo-exponentially with depth, and a lowconcentration (0.04 to 0.09 ppm of dry sediment) relatively constant-background zone. Mathematical modeling of the mercury concentration as a function of depth in these sediment cores and subsequent statistical analysis of the apparent constant-concentration levels reveals that two log-normal distributions are necessary to describe these observed constant concentrations. Any mercury concentration within the sediment in excess of the lower (natural) background level plus one standard deviation is defined as being due to pollution. Such calculations of the pollution component for these 63 cores serve as the basis for an estimate of the total mercury that has been added through pollution sources. The mercury-pollution load for bottom sediments of western Lake Erie is estimated to be 228 metric tons.