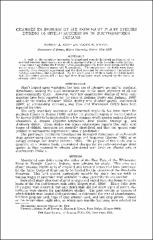 A study of the secondary succession in abandoned corn fields based on biomass of six selected common plant species was made in an area of alluvial soils in southeastern Indiana. It was found that during the first year after abandonment the fields were dominated by the winter annuals Erigeron annnus and E. canadensis. The second year the fields were dominated by Aster ericoides, a perennial, and the third year and for several years thereafter by Solidago canadensis, also a perennial. By the ninth year all of these early serai dominants had been either eliminated or had had their importance much reduced by the invasion of many other species.