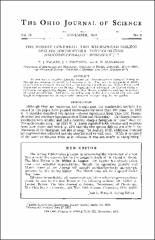 The coneheaded katydids formerly known as Neoconocephalus robuslus belong to two species: robustus (Scudder) and bivocatus n. sp. The two are sympatric in northeastern and midwestern United States, but robustus extends southward into Florida and Texas and westward into New Mexico. Populations of robustus in the Central Valley of California are apparently disjunct from the New Mexico populations and may be a result of recent introduction. Differences in calling song, width of the stridulatory area, and length of ovipositor are the most useful characters for separating the two species.