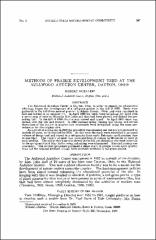 Tht Aullwood Audubon Center in Dayton, Ohio, in order to expand its educational offerings, began the development of a tall-grass prairie in the fall of 1959. Seeds were gathered in the fall from natural prairies in Adams County, Ohio, and were stratified in soil and buried in an outdoor pit. In April 1960 the seeds were broadcast by hand with a cover crop of oats on Miamian Silt Loam soil that had been plowed and disked the preceding fall. In the fall of 1960 the site was mowed and raked. In April 1961 straw was spread over the site and burned. In 1963 biennial spring burning was begun, and annual extensions of the prairie in quarter-acre increments were instigated, using the same procedure as for the original site.