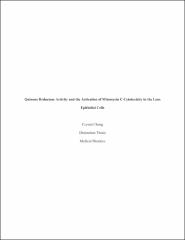 INTRODUCTION: Quinones, naturally found in the human body and environment, are highly reactive molecules that can be metabolized to free radicals and cause oxidative damage to ocular cells, contributing to eye disorders such as cataracts. The phase II detoxifying enzyme NAD(P)H: quinone oxidoreductase 1, also known as quinone reductase (QR), has been found to protect against quinone toxicity. High expression of QR has been detected in the lens epithelial cells. Identifying dietary compounds that promote high QR activity may be critical in preventing oxidative damage to the eye. Additionally, proliferation of residual lens epithelial cells after cataract surgery leads to a common post-operational complication called posterior capsule opacification (PCO). Mitomycin C (MMC) is a cytotoxic drug that is metabolically activated by QR. Because lens epithelial cells have high QR activity, MMC may be useful in treating PCO. METHODS: Primary dog lens epithelial (DLE) and immortalized human lens epithelial (HLE) cells were cultured. To assess QR expression, the cell lines were treated with the known potent QR inducer β-napthoflavone, and the induced QR activity was assessed using a microtiter plate assay. To assess the role of QR in activating MMC cytotoxicity in DLE cells, MMC was treated in normal DLE cells and cells with dicoumarol-inhibited QR activity; cytotoxicity was assessed with the MTT assay. MMC cytotoxictiy also was compared between DLE and HLE cells and assessed with the crystal violet assay. RESULTS: Only a 13% increase in QR activity was observed in HLE cells treated with β-napthoflavone (200µM) compared to control cells. QR expression in the primary DLE cell line was higher than HLE cells, but only a 20% increase in QR activity was observed upon treatment with β-napthoflavone (200µM). As a result, both cell lines were suboptimal for testing QR activation by dietary compounds. Treatment of HLE and DLE cells with MMC (200µM) resulted in 57% and 29% cell death, respectively. Interestingly, MMC-induced cell death appeared to be independent of QR activity levels in both cell lines. CONCLUSION: Higher QR expression was observed in the primary DLE cell line. The decreased QR expression in the immortalized HLE cells may be a result of immortalization where regulatory and anti-stress proteins have been found to be down-regulated. MMC-induced cytotoxicty in the DLE cell line appears to be independent of QR activity and may be associated with other reductases present in these cells. Identification of these reductase enzymes and their role in mediating MMC-induced cell death may provide additional information regarding the usefulness of this compound in treating PCO in both canines and humans.