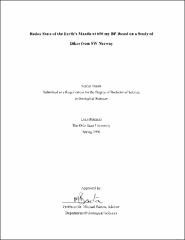 The redox states of magmas, monitored by the oxygen fugacity ( f U 7 ) . provide information about the redox states of the Earth's interior. In principle. it is possible to use oxygen fugacities for magmas erupted in different tectonic environments to map variations in the redox state of the underlying mantle. Published data indicate that the mantle source of'Mid Ocean Ridge Basalts (MORB) erupted at divergent margins is reduced relative to that of magmas erupted above subduction zones. Furthermore, the oxygen fugacities of at least some Ocean Island Basalts (OIB) (eg. those from Hauaii and Iceland) are similar to that of MORB, implying derivation from mantle source regions (mantle plumes in the case of OIB) with similar redox states. Finally, many intraplate volcanics have oxygen fugacities similar to those of OIB which is consistent with derivation from mantle plumes. The Neoproterozoic Egersund dikes in SW Norway intruded at 650-600 Ma. and the majority formed by intrusion of olivine tholeiites and tholeiites that are geochemically similar to modern OIB, in particular those from Hawaii. The magmas that intruded to form the dikes are thought to have formed from a mantle plume during the initial stages of the breakup of the supercontinent Rodinia. The rocks in the dikes are remarkably well preserved. with glassy chilled margins that contain olivine and plagioclase. Iletermination of the redox states of the magmas that intruded to form the dikes provides a ~~niquopcp ortunity to establish the redox state of plume mantle 650 my BP, and to compare these to those of magmas erupted from modern plumes. Olivines and glasses in two dikes have been analyzed with the electron microprobe and the analyses have been used to calculate the pre-eruption temperatures and oxygen fi~gacitieso f' the host magmas using a new method, based on olivine-melt equilibrium, developed at OSIJ. The microprobe was used to determine the compositional zoning in olivine so that the compositions, which were in equilibrium with the melt prior to eruption, could be constrained. This primarily involves examining variations in MgIFe bctueen core and rim in individual olivine crystals. Preliminary results indicate magma redox states similar to those obtained for other san~ples from the same dike system (ongoing research at OSU). In other words. the results obtained in this study are not anomalous, and the available data indicate that the magmas in this dike system crystallized over a narrow range of f02. This range is very similar to that obtained fhr samples from Hawaii and Iceland, indicating that the redox states of'plumes have remained virtually unchanged over the past 650 my. Moreover. there is no evidence fix secular variation in the redox state of the mantle over this time interval. Volcanic degassing cannot. therefore, be responsible for the increase in concentration of atmospheric oxygen that occurred at -600 Ma. It seems more likely that this increase is related to biogenic processes or to an increase in the rate of carbon burial.