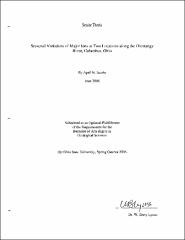 The Olentangy River is a major tributary of the Scioto River and flows through agricultural lands prior to entering the Columbus metropolitan area. Human activities such as agriculture and urbanization should influence the chemistry of the river water as the river flows through different regions. In addition, there are natural geochemical processes such as chemical weathering that will impart a chemical signature to the water. By observing and analyzing the variation in the stream chemistry through different seasons, we can gain an understanding of how precipitation events, along with natural and human influences, impact the water quality of the river. River water samples were collected at two locations along the Olentangy River from December 2004 to January 2006. Samples were collected at a location north of - Columbus, High Banks metro park (HB), as well as a downstream location, the Boat Launch near Nationwide Arena (BL). The HB location is thought to reflect both natural and agricultural inputs, while the BL location should include urban influences. After collection, the samples were filtered and analyzed for major anions and cations via ion chromatography. Ion concentrations from the samples were compared to stream flow data obtained from the USGS. The Olentangy River water consists of Ca > Mg = Na > K, reflecting the impact of the local geology. In general, all of the major ion concentrations vary with flow, having lower values at high flows. At both sites, calcium and chloride vary by a factor of 3 and 5, respectively through the year. The variation in nitrate is greater, with the lowest values observed in June. Calcium concentrations at base flow conditions varied as much - as 43% at BL. The BL site has higher chloride and sodium, generally lower nitrate, and no trend in calcium and magnesium concentration compared to the HB site. This suggests a source of NaCl from the urban landscape, a nitrate decrease either by dilution or by biological uptake, and little to no addition of source in calcium and magnesium between the two sites.