A Study of Ice-rafted Debris as a Paleoclimatic Proxy for the North Atlantic for the Last One Million Years. 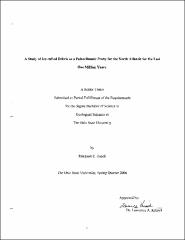 Discovering the reasons for abrupt climate changes is one of the major challenges in global climate research today. Through the use of 61s0 isotope records from ice cores in Greenland and marine sediment records from cores drilled in the North Atlantic, more detailed records of paleoclimate proxies for the North Atlantic can be established. Samples taken from sediment cores drilled off the southeastern coast of Greenland at Site 1305 from IODP Expedition 303 were used to develop a millennial-scale record of sediments transported into the North Atlantic by icebergs. The objective of this study was to determine the IRD input history at Site 1305 for the last one million years. Approximately 200 samples were analyzed for the abundance of icerafted debris (IRD) present in each sample. For this study, IRD is defined as the lithic grains in - the > 150 pm sand fraction. The abundance of IRD was determined as the weight percent of the > 150 pm sand fraction relative to the total bulk weight. The IRD weight percent was plotted versus the age of the sample. The sample ages were determined using an age-depth model constructed by the 303 Scientific Party. For Site 1305, distributed throughout the record there are a series of large IRD maxima that range from 1.16 to 13.37 weight percent (wt %). The major IRD peaks did not occur in the middle of glacial or interglacial stages, nor did most of them straddle a glacial/interglacial transition. Instead, the IRD maxima were positioned just before (average lead of 32.3 k.y.) or just after (average lag of 6.7 k.y.) the onset of glaciation. Site 1305 provides evidence to suggest that ice-rafting occurred during the early stages of global ice increase; local controls, not just global ones, were affecting ice production and - transport of icebergs. The data from Site 1305 indicate the following: no evidence of any long term trends in IRD abundance an apparent 100,000 year cyclicity in the largest peaks IRD maxima do not correlate directly to stage boundaries over the last one million years. The last observation may be the result of differences in the sources of the signals (local for IRD; global ice volume for the isotope stages), a transition from easily eroded surface materials to more competent bedrock during a glacial advance, and changes in the volume and presence of sea ice. Further work for this study will be to analyze the remainder of the existing samples, fill in gaps in the data set in order to possibly observe sub- Milankovitch events, and examine the grain composition of the IRD to identify iceberg sources.