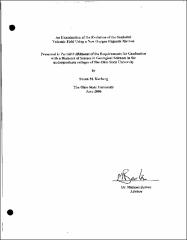 Volcanism on Santorini has occurred over the last ~600,000 years. During this interval most of the erupted lavas have evolved via processes such as fractional crystallization, mixing and assimilation, and therefore do not provide good information about their mantle source. The basalts that do occur on Santorini are parental to the evolved magmas. Studies of the basalts potentially provide information about magma genesis in the mantle beneath Santorini. Santorini is located in the Aegean Sea above an active subduction zone. The rate of subduction is ~ 5 cm per year so that over the lifespan of the volcanic field approximately 30 km of oceanic lithosphere has been subducted into the mantle beneath the volcanic arc. As with all convergent margins, subduction of lithosphere releases fluids and produces melt in the overlying mantle wedge creating the magma responsible for volcanism. These interactions should modify the composition of the mantle over time. However, it is not clear whether the composition of the mantle wedge and hence the compositions of basaltic magmas generated from the wedge vary through time. Santorini provides a unique opportunity to address this question. Data collected by previous workers for basalts from Santorini have been compiled and analyzed. In particular, the compositions of olivine crystals in two basalts erupted about 400,000 years apart have been used to define the pre-eruption temperatures and redox states of the host magmas. The redox state of the magma, monitored by the oxygen fugacity (fO2), is believed to reflect that of the mantle source region. The latter should be sensitive to recycling of oxidized oceanic lithosphere via subduction. An increase in fO2 indicates greater interaction of subducted lithosphere with the mantle. A new method, the Olivine-Melt method, developed at OSU, is being used to determine fO2. Graphical methods were used to examine compositional zoning in olivine and to constrain the compositions that were in equilibrium with the melt prior to eruption. This primarily involves examining variations in Mg/Fe between core and rim in individual olivine crystals. Results indicate that the redox states of the basalts, and hence the redox states of the mantle source region have not changed over 400,000 years. Moreover, the preeruptive temperatures of the basalts have not changed over 400,000 years. Basalts with similar compositions have been erupted over the entire lifespan of the volcanic field, suggesting that these conclusions are valid for ~600,000 years. The results are consistent with those being obtained using other geochemical data at Ohio State. This constitutes the first study of the long-term compositions of basalts erupted at a convergent margin. The results imply either that the mantle source region has remained constant with time, or more probably that processes such as mixing homogenize the mantle-derived basalts in chambers located at the base of the crust.