An Early Litter for the Opossum (Didelphis Marsupialis) in Ohio 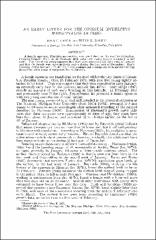 A female opossum, Didelphis marsupialis, was found dead on the road in Columbus, Franklin County, Ohio, on 25 February 1973, with nine young tightly attached to her teats. The size of the young suggests that they were conceived the first week of January and that the female was reproductively active during the last part of December. Early breeding at this latitude (lat. 40° N) is very unusual and is compared with known breeding dates from other areas of temperate North America.