The Genus Atrichopogon (Diptera, Ceratopogonidae) in Ohio and Neighboring States 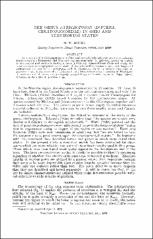 Nine species of A trichopogon occur in Ohio and immediately adjacent states: A. minutus, known from the Palearctic and Nearctic regions generally; A. websteri, occurring widely in the eastern and southern states; A. levis, previously reported from Ohio and easily the most common ceratopogonid in the state; A. fusculus and A. titanus n. sp., both large and widespread but scarce; A. peregrinus and A. fusinervis, found in limited numbers; A. geminus n. sp., fairly common; A. falcatus n. sp., known from only 1 locality in Michigan. A. websteri and A. levis, not previously recorded from Canada, occur on Pelee Island, Ontario, as does also A. geminus n. sp.