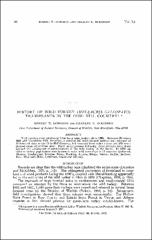 Wild turkeys once inhabiting Ohio have been extinct since 1904. Between February 1950 and November 1971, therefore, a total of 397 wild-trapped turkeys was released on 16 forested sites in the Ohio Hill Country, 142 received from other states and 255 transplanted from other Ohio sites. Field investigations following these releases have documented the subsequent re-establishment of the wild turkey in the State. In 1972 significant turkey populations were known to exist in 92 townships in 17 counties (Jefferson, Monroe, Washington, Morgan, Perry, Hocking, Athens, Meigs, Vinton, Gallia, Jackson, Ross, Highland, Pike, Lawrence, Scioto and Adams).