Personality as a Variable in the Behavior of Birds 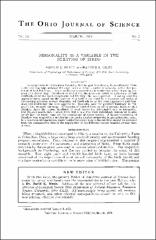 Investigations with Common Grackles, Red-winged Blackbirds, Brown-Headed Cowbirds, and Starlings indicate the importance of what is called personality in the interpretation of bird behavior. These studies were carried out in connection with a banding program at a decoy trap. An objective test of the characteristic called complacency reveals Cowbirds to be the most complacent and Starlings the most agitated. A rating scale for aggressiveness, based on the reaction of a bird in the hand to a standardized series of threatening gestures, reveals Grackles and Cowbirds to be the most aggressive and Starlings and Red-wings the least aggressive. Grackles have the greatest tendency to repeat, i.e., re-enter the trap. Recoveries of banded birds by other persons indicate that Grackles have the largest incidence of local recoveries, presumably due to topophilia. The Grackle population is much more stable (e.g. has more individuals remaining in area for 10 days or more) than are the populations of other species. A larger proportion of Grackles was trapped in a residential area and a smaller proportion in an agriculutral area. In a roost-control operation, more banded Grackles were collected than might be expected from the comparative sizes of the populations of the different species trapped at that time of year.