Ohio’s Response to the Increase in Spanish Speaking Populations: 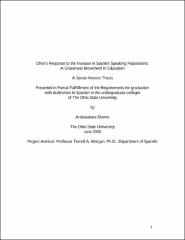 The 2000 U.S. Census results named Hispanics as the largest minority nationwide with a 58% growth rate between 1990 and 2000. Between these same years the Hispanic population in Ohio grew 55.4%. The Hispanic populations in four Ohio counties-- Cuyahoga, Franklin, Lorain, and Lucas--comprise 51% of the total Ohio Hispanic population but others areas are experiencing rapid growth . In 2002 the Ohio Commission on Hispanic/Latino Affairs (OCHLA) composed a report called “The Educational Status of Hispanic/Latino students in Ohio’s K-12 Public Schools 2001-2002.” This report provided alarming statistics concerning Hispanic education, including the findings that 49% of Hispanics drop out of high school; most Hispanic students score almost two times below the state average on all levels of state proficiency exams; Hispanic suspension percentage rates are considerably higher than those of non-Hispanic whites in Cleveland, Lorain, and Toledo public schools; and 50% of the state’s Limited English Proficient students are Spanish-speaking. It also identified barriers to improving Hispanic education as “poverty, mobility, lack of English fluency” on the students’ part and on the teachers’ part “low expectations and lack of cultural awareness.” In early 2004 the National Hispanic Caucus of State Legislators and the National Black Caucus of State Legislators completed an information guide for the Closing the Gap Campaign which focuses on improving education for Hispanics/Latinos and African-Americans in the target states of Illinois, Maryland, New Mexico, New York, Ohio, and Texas. This informational guide provides suggestions and guidance to legislators in these states to increase funding for and improve the quality of public education. As a result of the recommendations made by both of these documents, The Ohio State University, the Ohio Department of Education, the Ohio Board of Regents, the Ohio Council of Urban Leagues, the Ohio Close the Gap Campaign, and members of the Ohio General Assembly formed a partnership to work toward education reforms. In early 2005, OCHLA established the Education Campaign Symposia Advisory Committee (ECSAC) composed of community members and representatives of these partner organizations. The objectives of this committee are to create a series of conferences and informational sessions that focus on the academic achievement gap experienced by Hispanic students. The first symposium held by ECSAC was the Soluciones Roundtable event that took place January 28, 2006 at The Ohio State University. This roundtable was attended by over 100 individuals from all over Ohio. Five levels of community were established: (1) parents & community members; (2) educators and teachers; (3) superintendents and administrators; (4) policy makers & elected officials; and (5) experts in the field of education. The objective of this symposium was to increase cooperation among the different levels of educational community. The participants of the Soluciones Roundtable were challenged to create Local Roundtable Groups in their Ohio regions defined as the Northwest, Northeast, South & West, and Central & Southeast . The purpose of this study is to evaluate the effectiveness of the Soluciones Roundtable. Eighty-three participants of the event were asked to participate in a survey in an effort to find information about the goals formed as a result of the event, progress that has been made toward these goals, and obstacles encountered in this early stage. Participants were also asked if they would like to participate in a 10-20 minute follow-up phone interview to further discuss any concerns that they have with the Soluciones event and/or campaign. The overall objective was to identify areas for improvement that could strengthen efforts to unite the educational community of Ohio. Twenty-three participants responded to the survey and 3 of them also completed a follow-up phone interview. The majority of the participants of the study felt that the Soluciones Roundtable event met their expectations, that they would attend a similar event in the future, and provided suggestions for improvement. The participants of the study also felt that they were able to apply some of the concepts learned during the Soluciones Rountable since the time that the Roundtable took place. Based on the results of this study a number of recommendations were made to OCHLA about the future direction of this grassroots education campaign. 1. Ohio Commission on Hispanic/Latino Affairs (OCHLA), “The Educational Status of Hispanic/Latino students in Ohio’s K-12 Public Schools 2001-2002.” 2. Escudero, Ezra. “Education Campaign Symposia Advisory Committee (ECSAC) & Soluciones Roundtable Report.” March 2006.

The Ohio Commission on Hispanic/Latino Affairs (OCHLA) did grant access to the information needed in this project in the form of a paid internship.
The Honors Arts and Sciences College did award a scholarship for the completion of this project.
The Ohio State University Graduate School did provide a research grant for my participation in their Summer Research Opportunities Program.