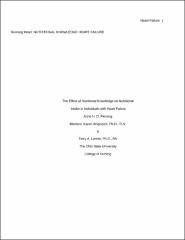 Background: The purpose of this study was to determine the nutritional knowledge of people diagnosed with heart failure (HF) and how it affects their diet adequacy. There are approximately 4.8 million people in the United States living with HF. Less than 15% of people diagnosed with HF survive more than 8 to 12 years, and 80% of males and 70% of females under the age of 65 die within 8 years of diagnosis. For an individual diagnosed with heart failure, the one-year mortality rate is one in five (Nicol, 2002). Adequate knowledge and understanding could play an essential role in improving nutritional status and delaying disease progression in heart failure. Method: A convenience sample of 27 patients (also being used in a primary study) with heart failure (HF) due to coronary heart disease who met the specific inclusion criteria was studied. Sixteen of these individuals also completed the nutritional intake portion of the study. Their diets were analyzed by various valid tools including a detailed 4-day food diary, body weight history, body composition, body mass index (BMI), serum protein, and a questionnaire to assess levels of knowledge in general nutrition and nutritional issues specific to heart failure. Results: Participants scored an average of 55.8% correct (SD= 11.3) on the nutritional knowledge questionnaire. Accuracy ranged from 30.8% to 83.8% on knowledge subscales, but 11 of 12 subscale scores were less than 70%. Various nutrient intake inadequacies were identified, such as greater than 50% of the participants were deficient in calcium, magnesium, and zinc. Also, nine out of the 10 selected nutrients in the study were shown to have some degree of deficiency. An interesting result was that there appeared to be no significant relationship between the important heart failure issue of sodium knowledge and patients’ actual intake of sodium. Conclusion: Heart failure is currently the only cardiovascular disease that is increasing in incidence, mortality, and prevalence. It is the single most common cause of hospital admissions in people over the age of 65 (Nicol, 2002). The findings demonstrate that overall, nutritional knowledge in patients diagnosed with heart failure is below satisfactory. This is especially the case regarding application of sodium restriction intake in their daily lives, which has shown to delay HF disease progression and symptoms. More research needs to be completed to understand why patients diagnosed with heart failure who have some knowledge about foods high and low in sodium, are not choosing the lower sodium foods for their own diets.