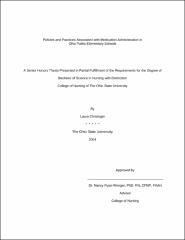 PROBLEM. The federal No Child Left Behind initiative ensures that all children, regardless of health status or disability, have a right to attend public schools. Children with asthma, diabetes, ADHD, and other chronic illnesses or disabilities often need daily medications to control symptoms and prevent acute illness. Thus, an average of 5.6% of all public school children receive medications during the school day. Unlike hospitals, which are closely regulated, Ohio public schools have no standards for medication administration. A concern is that unlicensed and untrained personnel including principals, secretaries or health aides may be administering medications instead of a registered school nurse. A law initiated by the Ohio Department of Education protects these unlicensed personnel from liability for medication errors. Dwindling resources for public schools suggest that children in rural and low-income areas of Ohio may be at higher risk for medication errors because of fewer school nurses to supervise the medication administration process. PURPOSE. This study was designed to identify policies and procedures currently used by individual schools, evaluate them compared to accepted nursing standards, and identify disparities in risk for medication errors among Ohio public schools according to their typology: rural, small town, urban/suburban, major city; high/low socioeconomic status; poverty level; size; type of district; and county. DESIGN. Of 2,312 public elementary schools in Ohio, a random sample of 300 schools was selected to receive a one-page anonymous survey addressed to “School Nurse.” The survey was designed to answer the following questions: who has responsibility for administering medications; what is their level of training; how is medication stored and documented; how are medication errors documented and managed? Responses were summarized according to frequency and percentage of categorical responses, and evaluated according to accepted nursing standards. Disparities in each of the above variables according to the schools’ typology were examined using cross tabulation analysis. RESULTS. A total of 287 surveys were mailed (13 schools no longer in operation), and 146 were returned for a response rate of 51%, representing 61.4% of the counties in Ohio. The majority of school nurses were white (n=126) and female (n=145), with an average of 9.3 years of experience as a school nurse (range 1-30; mode=6; SD=7.3). On any given day, medications were administered by the school nurse in only 32.8% of the schools and by the secretary in 42%. Training of non-nurse personnel in medication administration was typically annual or less often, informal, conducted by the nurse, with no standard of performance expected. None of the schools met nursing standards for storage or documentation of medications. The most common medication errors were missed doses (57.1%) and undocumented doses (38.1%). Typology four schools (small city, low socioeconomic status, high poverty) had the highest percentage of schools (77.8%) in which the school nurse did not administer medications any day of the week. Large city, average socioeconomic status, and high poverty schools had the largest percentage (50%) of schools in which the school nurse administered medications five days a week. IMPLICATIONS. For the safety of Ohio’s children, the need for a standard of care for medication administration in Ohio’s elementary schools is clear. These standards should be developed, implemented and monitored by school nurses, not by education administrators or lawmakers.