Thirty-Day Analysis of Dyspnea and Edema in Heart Failure Subjects 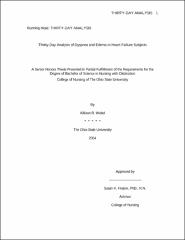