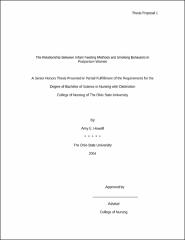 The purpose of this research is to increase the knowledge about the relationship of positive health behaviors and smoking relapse rates in order to improve future smoking cessation and relapse prevention interventions. This study examined the correlations between infant feeding method (breastfeed and formula feed), smoking relapse rates, and other health behaviors in the postpartum time period. The study is part of a larger, postpartum, nurse-delivered smoking cessation intervention sponsored by the Robert Wood Johnson (RWJ) Foundation. Forty-two women from the primary intervention were included in this study. Data was collected at baseline on socio-economic status, household environmental tobacco smoke (ETS) and knowledge of health-related factors surrounding smoking. Data was again collected in the postpartum time period at six months on breastfeeding status and smoking status. Fourteen women made no attempt to breastfeed and 28 women breastfed their infant for various degrees of time. The breastfeeding group was older (mean = 24.5, SD = 5.24) compared to the non-breastfeeding group (mean = 21.2, SD = 2.74) (p=0.012) and had more years of education (mean = 13.2, SD = 2.86) compared to the non-breastfeeding group (mean = 11.3, SD = 1.68) (p=0.009). The breastfeeding group was significantly less dependent on nicotine than the non-breastfeeding group, as measured by time to first cigarette (p=0.023). Abstinence and relapse rates were not significantly different among women who breastfed for different lengths of time. Knowledge of health-related factors, ETS conditions and abstinence and relapse rates were also not significant by different infant feeding groups. Further research is needed to explore these variables in order to find links between postpartum behaviors and relapse rates to influence positive postpartum interventions. This is one of the few studies to investigate the relationship of women's health behaviors and infant feeding methods. Greater promotion of positive health behaviors and long-term breastfeeding of six months and more may lead to increased abstinence rates in the postpartum time period.