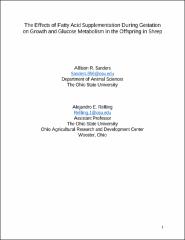 Multiple studies have shown improvements in livestock performance as a result of polyunsaturated fatty acid (PUFA) or monounsaturated fatty acid (MUFA) supplementation, as well as an effect on fetal programming of offspring. In sheep, it has been observed that PUFA supplementation during late gestation has been shown to effect offspring growth; however, little is known about how different energy supplementation levels during growing stages could impact glucose metabolism. This research was conducted to evaluate the performance effects on glucose metabolism and growth rate in fetal programmed lambs fed on different energy intake programs. Fifty days before their expected lambing day, 100 pregnant ewes (50 per treatment, allotted in 10 ewes per pen) were supplemented with either 1% of their dry matter intake with calcium salts of MUFA or 1% of their dry matter intake with calcium salts of PUFA. From lambing to weaning all the ewes and lambs were housed and managed together. After weaning, a group of 60 wether lambs were randomly assigned to one of four treatments: Dam supplemented with MUFA and lamb fed ad-libitum diet, dam supplemented with MUFA and lamb offered an 85% feed restricted diet, dam supplemented with PUFA and lamb fed ad-libitum diet, and dam supplemented with PUFA and lamb offered an 85% feed restricted diet. On day 35-45 after weaning, 24 lambs were randomly selected to conduct a glucose tolerance test. Ewe and lamb performance, plasma glucose, and insulin concentrations were analyzed as a randomized complete block design with a repeated measurement procedure (SAS 9.4) considering a 2x2 factorial (dam supplementation and feed intake level). Ewe supplementation in late gestation with fatty acids did not have an impact on ewe nor lamb performance. Fetal programming had no effect on plasma glucose concentrations nor insulin concentrations. There was an interaction (P < 0.05) between feed intake group (restricted vs ad libitum) and time on plasma insulin concentration. As time increased, insulin concentrations also increased from 2 to 15 minutes after glucose administration until decreasing to concentrations that were observed before the administration. These results may have been impacted by COVID-19 restrictions, which did not allow for fatty acid supplementation of the ewes to be carried out through lambing. Further experimentation needs to be completed to understand the importance of supplementing ewes with fatty acids during different stages of gestation and the lasting effect on the lambs’ glucose metabolism.