Zooplankton Grazing on Picoplankton and Nanoplankton During Harmful Algal Blooms 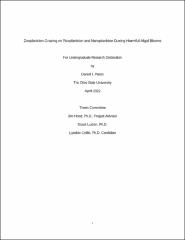 Lakes worldwide have experienced increases in cyanobacterial harmful algal blooms (cHABs), with large potential consequences for food webs and energy flow. The effect of cHABs on aquatic food webs remains poorly understood, in part, due to a lack of information about grazing by zooplankton during these events. Mesozooplankton (200 - 20,000 µm) can be an important energetic link between primary producers and higher trophic levels; however, cHABs are generally considered less edible and nutritious for many mesozooplankton taxa and therefore may impede energy transfer through food webs. To better understand how cHABs influence mesozooplankton feeding dynamics, we examined grazing in populations of smaller, and likely more edible picoplankton (0.2 - 2 µm) and nanoplankton (2 - 20 µm). We quantified grazing by mesozooplankton on autotrophic and heterotrophic pico- and nanoplankton using gradient grazer assays on two dates (August and September 2021) during a cyanobacteria bloom in the western basin of Lake Erie. On each date, mesozooplankton densities were manipulated and the change in biomass of pico- and nanoplankton over a 24-hour incubation period was measured via epifluorescence microscopy after staining with DAPI (4′,6- diamidino-2-phenylindole). Significant grazing was found on autotrophic and heterotrophic nanoplankton, while grazing on picoplankton was low or absent. Grazing patterns were largely reflective of food abundance in nanoplankton autotrophic and heterotrophic edible size categories. Our results clarified grazing patterns of mesozooplankton on different size categories, enhancing understanding of food webs during cHABs.