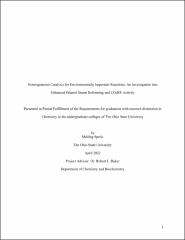 The need for environmentally conscious fuel sourcing and for limiting human contribution towards polluting the environment are vital to the survival of earth and its inhabitants. One way to obtain environmentally friendly fueling is to switch to fuel cells. With appropriate steam reforming catalysts, it can become possible to operate fuel cells using H2 obtained from biomass, such as corn-derived ethanol. CeO2 nanoparticles on nickel show great promise for their ability to catalyze the ethanol steam reforming (ESR) for deactivation-free H2 production due to the formation of carbon filaments (CFILs) between regions of pure nickel and densely packed nanocubes. Tuning the coverage of CeO2 on a nickel substrate and characterization of the catalyst provides a mechanistic and molecular understanding of the increased production rates of ESR. Similarly, research shows that gold enhances the electrocatalytic CO2 reduction reaction. Further, baseline studies on reaction conditions and the addition of an amine shows how amine addition aids in driving the electrocatalytic reduction of CO2, and surprisingly, the production of CH4. Both studies are useful for the continued study of renewable energy, green chemistry, and catalysis.