Disease in the British Army in India: Colonial Investigations and Interventions 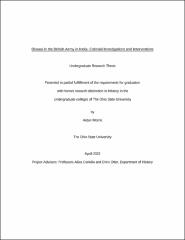 This thesis investigates how Victorian conceptions of health, race, and morality influenced British public health practice and malarial prophylaxis in colonial India and how these practices changed over time, especially in response to the bacterial revolution in the late 19th century. In doing so, it will illuminate the links between mid-century British public health pioneers such as Edwin Chadwick and Florence Nightingale and the leaders of colonial public health in India in the latter half of the 19th century. While there is a great deal of historical analysis related to the roots of public health in Victorian ideals, there has not been sufficient scholarlship that studies these influences together in a colonial dynamic. In addition to spanning the gap in scholarship, this research will also be of great relevance to our current health crisis. This thesis aims to provide historical context for the most pressing questions of the pandemic: issues of cultural competency, medical autonomy and coercion, and racial disparities in health. All three of these concepts are involved in what has been termed the "colonial laboratory", a reference to the imperial possessions of the European powers and so called because natives overseas did not receive the same rights as Europeans. The implementation of public health infrastructure in India reflected these racist attitudes since priority was given first to maintaining the health of the British Army and administrators. These prejudices stemmed in part from a scientific theory called "climatic determinism", the idea that native peoples had an innate resistance to the diseases common to their territory of origin. The distribution of public health resources based partially on this prejudice resulted in significant racial disparities in health. In addition, the British medical establishment pursued such culturally insensitive Western practices as dissection without consent, which Indians abhorred on the basis of religious belief. This cultural imperialism led to a great and lingering distrust in Western Medicine in favor of indigenous medicine, a result that many post-colonial populations manifest today. A system of public health was first introduced in colonial India in the wake of a traumatic event: In 1857, the Indian troops serving under the British East India Company rebelled and besieged the British garrison in the city of Lucknow. 2,000 British soldiers of the East India Trading Company were eventually killed, leading the British government to take over control of India. Despite the high volume of the death toll, deaths from disease made up a much larger portion of mortality in the army for the year of the rebellion. To investigate this state of affairs, The Royal Commission Appointed to Inquire into the Sanitary Conditions of the Army in India published their eponymous report in 1864. This report drew upon the then-current miasma theory, which held that "bad air" caused infectious disease. Environmental conditions such as humidity, heat, decomposing organic material, and especially human waste were thought to be at the root of "bad air". The report concluded that the proximity of the Army to the local population necessitated instituting sanitary measures in both the Army and the surrounding local community to curb the spread of malaria and other infectious diseases. Malaria posed a particular problem for British Colonial ambitions in India because of its ubiquity, lethality, and lingering effects. According to the Commission's report, fifty percent of hospital admissions in India across a period of ten years were from malaria. Even more troubling was the fact that many survivors of malaria had to be discharged from the army due to lingering health problems. The combination of deaths and medical discharges caused by the disease resulted in a much-depleted military force in India. In the end, the measures implemented after 1864 were effective in curbing the spread of disease, but not for reasons the British understood. Finally, in the last decade of the nineteenth century, germ theory replaced the miasma theory of disease and ushered in the "bacterial revolution", a sea-change in medicine and public health that marked the end of an era in Britain and in the British Empire.