The Pragmatist Theory of Truth and Deliberative Democracy 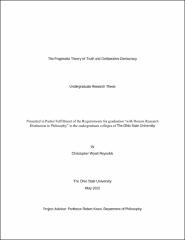 In this thesis, I will analyze Cheryl Misak's essay "Making Disagreement Matter: Pragmatism and Deliberative Democracy"; specifically, I will evaluate the essay's central argument (what I call the Price-Peirce-Misak, or PPM, argument), which uses Huw Price's analysis of the norm of truth together with Charles Sanders Peirce's account of truth as the end of inquiry to show that "there is a direct connection between deliberative democracy and the pragmatist theory of truth" (Misak, 2004: 471). My main takeaway is that although the Price-Peirce-Misak argument is fascinating, it is unclear whether we should endorse it, because (pace Price) there does not seem to exist a norm of truth independent of a norm of justification (Section 4), there are other pragmatist theories of truth besides Peirce's (Section 5), and the synthesis of the two would not entail the political consequences Misak has in mind (Section 6).