Sinners and Saints: The Elasticity of "Prostitute" in Medieval Europe 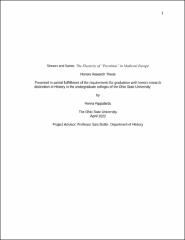 The relationship between the Catholic Church and prostitution is complex, in that surfacely the Church needed to condemn it, as prostitution intrinsically involves intercourse outside of marriage, which is a sin. And yet, one of the most influential theologians in history, Saint Augustine of Hippo, infamously likened prostitutes to sewers—dirty, but necessary. As such, the characterization of the medieval period as a pious and prudish era with respect to sex is complicated, in that the Church was required to condemn prostitution on the basis of sin, and yet also acknowledge that it was essential to society. Because the Church recognized the need for prostitution, it was necessary that prostitution be controllable. This control was asserted on multiple levels, both tangible and intangible—tangible referring to formal canon law and management of brothels, and intangible referring to sermon stories and other forms of gospel that equated prostitution with sin, and sometimes even encouraged repentance. Furthermore, the lines between prostitution, fornication, and "proper" marital sex were blurred, meaning essentially that any woman who engaged in intercourse was at the risk of being labeled a prostitute, and therefore attempts made by the Church to control prostitution are in essence reflective of the Church's attempt to control women, given that there was no clear distinction between a formal "prostitute" and a sexually active woman.