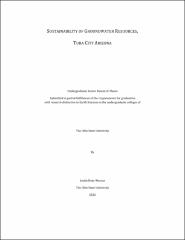 Research regarding the sustainability of groundwater resources in Tuba City, AZ has been carried out in this paper using an analytical model, with the Theis equation in Matlab. Tuba City, AZ is within the Navajo Nation with the highest population and has been experiencing water resource issues with the climate becoming arider. There are six active groundwater wells in Tuba City that are near each other causing concern for cones of depression overlapping increasing the rate of drawdown. The water used in Tuba City is pumped from the Navajo aquifer and this unit will be the focus of the study. With the projected increase in water demand in Tuba City, the increase in pumping from the Navajo aquifer will cause the aquifer to become unreliable. Results of the simulation in Matlab using the Theis equation show a max drawdown of ~300 m by 2030 and ~ 700 m by 2060 with the aquifer thickness ranging from 150-300 m. Wells that are close together show an overlap of cones of depression increasing the drawdown rate. More data is needed through field measurements to obtain a better understanding of the well-pumping impacts in the Navajo aquifer within Tuba City, AZ.