Investigating photocatalytic oxidation of NH3 and reduction of N2 in basic solution under negative applied voltage on a plasmonic surface. 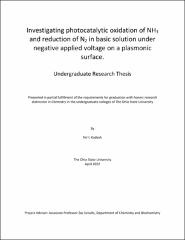 Photoelectrochemical processes are of growing interest in the field of plasmonic catalysis due to enhanced selectivity and improved rates of reaction. These enhancements are due to the high-energy electron-hole pairs generated in plasmonic, and semiconductor, nanostructures. In this experiment, a copper oxide/silver electrode was fabricated by electrodeposition. Initial surface characterization was performed using surface-enhanced Raman spectroscopy (SERS) and by comparing the spectra with the literature. Once the surface was characterized, the fabricated electrodes were used in two subsequent experiments. The first involved submerging an electrode in an aqueous solution containing N2 that had been buffered with sodium carbonate and bicarbonate. The second experiment involved the electrode being submerged in aqueous solutions of ammonium hydroxide. In both experiments, upon application of negative potentials versus the Ag/AgCl electrode and taking the SERS spectra of the solutions, it was noted that a peak at 766 cm-1 appeared in both experiments. This peak closely resembles the N-H bending mode of liquid hydrazine at 783 cm-1. As a result, it is believed that hydrazine is evolving from the reaction, both by the reduction of N2 and the oxidation of NH3 individually. Both experiments depend on the adsorption of the analyte onto the working electrode surface and thus result in a lowered frequency of vibration. A mechanism has been proposed for each process. However, further experimentation should be undertaken to confirm the correct course of intermediates.

Except where otherwise noted, this item's license is described as Attribution-NonCommercial 4.0 International