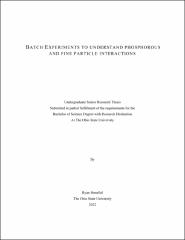 Due to the widespread use of fertilizers in agricultural regions of the world and rising nutrient levels in many streams, it is important to understand the downstream transport of nutrients like phosphorus (P), which depends strongly on dissolved P interactions with fine particles in the water column and streambed. In the last decade, new tracers have emerged to help quantify the movement of particulates, and opportunities abound to use those tracers in combination with traditional KH2PO4 injections in streams. I aim to improve the combined use of these tracers through a series of benchtop experiments involving KH2PO4, Dayglo fine particles, and the surfactant needed to mix the particles (Sodium Hexametaphosphate, or SHMP). In the first set of experiments, I measured the contribution of dissolved P from the dissociation of SHMP in deionized water and stream water. The SHMP added, on average, around 0.0040 ppb of dissolved P for every ppb of SHMP added. A second set of experiments was performed to test the relationship between Dayglo particle counts from cytometry and mass concentrations. Results show a logarithmic relationship between mass concentration and particle count that can be used to relate the two units. Lastly, batch experiments were performed to determine P sorption characteristics of Dayglo particles. The data follow a Langmuir model. Dissolved P appears to have a greater sorption affinity for Dayglo particles, compared to natural sediments. As a thermoplastic, Dayglo particles are a novel material for sorption studies. Together, these results can be used to guide future stream injection experiments and suggest that Dayglo behaves like a sorptive particle.