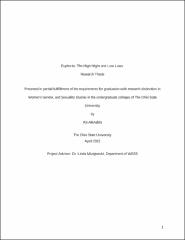 Teen-oriented television programming offers a locus for various socio-cultural issues worthy of feminist media critique. This case study focuses on the buzzworthy television series Euphoria (2019) in conversation with previous research on other teen drama shows. Euphoria certainly pushes the envelope for what teen programming can represent, including storylines about drug addiction and mental illness in adolescence, (trans)gender identification and exploration, and queer sex and romance. While Euphoria transforms how mainstream audiences view addiction, challenges patriarchal norms, and includes minority experiences seldom showcased on the silver screen, the show too often relies on reductive teen drama conventions that make a spectacle of trauma and children's bodies through the male gaze. This study intends to examine the efficacy of Euphoria's ability to progressively depict addiction and mental illness, queer romance, and the violence of patriarchal society, while also critiquing the show for its harmful perpetuations of teen drama conventions that fetishize teen bodies and trauma. Even while doing socially progressive and transgressive work, Euphoria provokes ethical questions about teen tv shows that explicitly depict drug use and sex. Exploring these questions can hopefully lead to more socially conscious popular culture production and viewing, pointing to the media we consume every day as avenues for feminist imagination.