Queering the Family Sagas: Embodiment and Empowerment through Gender 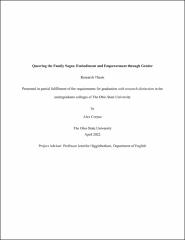 The idea that social gender is separate from biological sex is an idea that was first proposed in the 1940's, and has been refined over the years by feminist and queer theoriests alike, most notably Judith Butler, who forwarded the idea that sex was itself also socially constructed and does not always reflect biological reality. Despite its recent history, this conception of gender, I argue, is fitting for how gender is portrayed in the sagas, and this is best elucidated by the use of magic by male and female people. When it comes to gender in the sagas, women have been the primary focus, with important scholars such as Jóhanna Katrín Friðriksdóttir and Carol Clover presenting different ideas on how women act in the sagas and their role in the narratives. This approach implies that women in the sagas are the only ones with gender, which is an approach I wish to work against. Though small, there is a growing number of people in saga research who are focusing more on men and their relationship to gender and to women. Using both the well-trod feminist research on women in the sagas and the burgeoning scholars beginning to include men in their discourse on medieval Scandinavian gender, I have both a strong theoretical foundation and a long list of prior research on which to build. This research is critical to our understanding of the Middle Ages, and is well precedented by feminist, critical race, and queer scholars reaching their social theories backwards in time in order to better understand our place with in the present. By investigating how gender was constructed and portrayed in the Icelandic family sagas, I intend to expand our conception of what gender was in the Middle Ages-- namely that it was likely as nuanced and diverse as it is today. I also pursue this line of research in hopes of dissuading the use of Scandinavian culture to dog-whistle white supremacy in the United States; by queering the literature that is so often cited by those who wish to claim a white ethno-state as the proper United States, perhaps it will be less appealing to exactly those kinds of people.